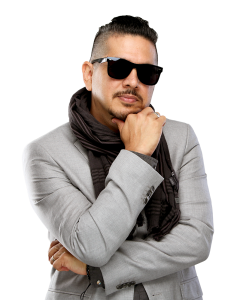 It was a bold move to say the least. Intricately packing up a few essential belongings, leaving behind friends and family, and transporting yourself to another part of the globe may seem crazy, but not when destiny is calling. Armed with only a 35mm SLR film photography camera, this young Panamanian-Mexican arrived in the concrete jungles of NYC and began to lay the groundwork for photography and cinematography genius.

After shooting over 150 album covers and directing over 40 music videos, this visionary took himself and his novel organization to the next echelon.

Hastings has shot and designed an unprecedented number of album covers for some of the biggest names in the music industry, and worked alongside artists as diverse as P. Diddy, Taylor Momsen, Marc Anthony, Jodeci, Wu-Tang, Eminem, KRS One, Jay-Z, Tribe Called Quest and Jeru tha Damaja to name a few. Utilizing his rolodex and personal expertise of cinematography (studied at NYU), the
young sage began directing music videos, commercial, short films and feature films soon after.

Bold and cutting edge, his videos mirrored the same originality and intensity found in his photographic work. Hitting heavy rotation on networks like BET, MTV and over 2 billion hits on You Tube the innovative videos like ‘Definition’ for Mos Def, Don Omar, Prince Royce, Gerardo Ortiz and WuTang solidified Hastings’ stance as a multi-faceted artist.

In 2015, Hastings started the annual Official Latino Film Festival to provide opportunities to Latinx filmmakers and actors in the U.S. due to the lack of representation of his community in film and TV. He was able to land a partnership with HBO, Verizon Media and DIAGEO for the festival.

In addition to all of this, he produced, wrote and directed two indi feature films The Love Potion (2010) and most recently Venus de Macho (2019).

Hastings enjoys teaching and passing on his knowledge to other young artists, and will continue to do so in every project he takes on.

With more than fifteen years servicing the Music, TV and Entertainment industry with iconic visuals, Hastings has managed to touch some of the most popular projects of the two decade.  Ranging from Photography to Directing a Motion Picture Movie, the elements found in his work are the true reflection of the diverse American Culture of today.

If you want to hire Danny Hastings Services, Don’t hesitate to contact us. We have a team ready to answer any question.